NAV 2013 error - The program could not create a connection to the server.

I did get NAV 2013 successfully installed, but I am getting this message when starting the Windows Client (i.e. RTC): 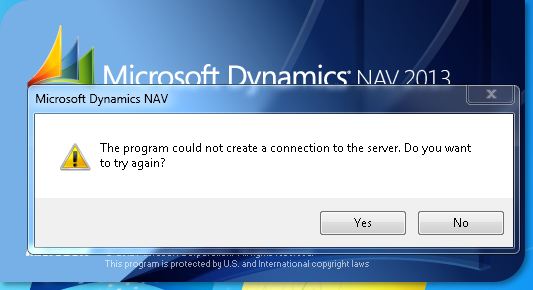 Didn’t find a lot on the internet on this for NAV 2013. Actually only this from msdn:

But that didn’t help me.

That’s one of the “joys” working with new versions - you are touching land nobody else have touched before. Just like Columbus did. Just a shame the Vikings had been there 500 years earlier. How wouldn’t things have been if they had been documenting it better?

I’m also still a novice with NAV 2013, but I guess that you already tested that you still are able to connect with C/SIDE? And that you can access and change the NST server settings with the service module?

On my first install (of the betas) I also did a full install, and that didn’t work either. I think it was because it was using the same ports as my existing NAV 2009 R2 install. But it worked fine installing the components separately.

Did you check this video how to install without NAVDEMO instance?

Did you check all your config files?

If one of the ports does not match, you can get this problem.

Guys, going to check your input somewhere tomorrow. Will get back with the result.

Tomorrow was way later than planned.

Nevertheless, got it working now in a setup that I wanted, i.e. demo database on my installed SQL Server (now upgraded to SQL Server 2012, and not on an SQL Express installation.