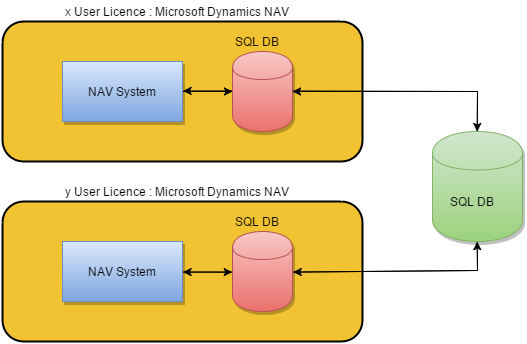 There is a Scenario:

There are Two Identical NAV Systems with X and Y number of End User Licence form Microsoft Dynamics NAV. The Data is being pushed and fetched from both the SQL DB(RED) into a third SQL DB(GREEN) using any Alien/ third party addon Technology. Now if the information/Data of NAV System 1 can be accessed and passed into NAV system 2 and vice versa via Sql DB(RED) then is this illegal??? [^o)]

Running 2 different databases using the same license file is perfectly OK, since the total number of concurrent users is accumulated across the databases.

But, if I understand your scenario correct, then you are using the SAME license to run 2 different companies in 2 separate environments, and that obviously os not allowed.

Running 2 different databases using the same license file is perfectly OK, since the total number of concurrent users is accumulated across the databases.

This is not correct. The NAV license is restricted to having a single system database (That’s defined as the NAV tables that hold all the user and security info). So multiple stand-alone production databases is not allowed.

As for the scenario above, I’d think it would be OK if each database had a unique NAV license. But not if the same license was used by both.

Are you 100% sure of that? You can easily have several NAV databases runing on the same SQL server using one license file, the NAV databases can - in total - only use the number of sessions allowed in the license.

For example, if you have DB1, DB2 and DB3 and a license file with 10 sessions, and DB1 has 5 users online, DB2 has 4, and DB3 has 1 user the total number of used session is 10, and no users will be able to log on to any of the databases.

If you look in the licensing guide you will find this phrase:

Nothing about only one database.

But in this case:

Yes, you might be able to do things technically, that are not allowed in the license terms

However, even if it is technically possible, you still have to respect the license terms.