I am importing product data. I imported an Excel table with about 2000 data. After successfully importing each product data, one of my apis will be called to synchronize this data to CRM, but the following error will occur during the import process: 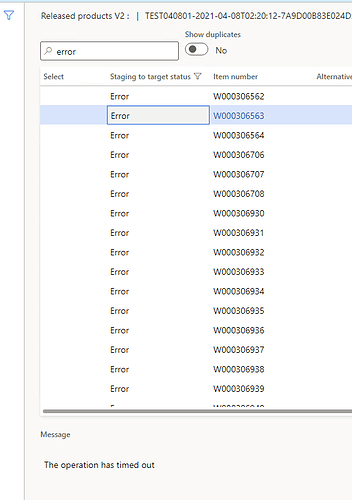 How can I solve such an error?

Does it mean that you slow down import by making a network call to another system for every single item import? If so, you architecture is indeed causing the problem you’re observing.

To be completely sure, simply throw away the synchronization, rebuild the application and try the import again.

It’s true, but I don’t want to give up such synchronization. Is there any way to avoid it?

A more meaningful design would be importing the data first and synchronizing it subsequently. If you make creating records slow, you won’t block just data imports, but you’ll slow down the whole system, which doesn’t sounds like a good idea. Users usually complain that the system isn’t fast enough; they don’t want to make it slower.

Also, if communication with the other system doesn’t work at all, won’t your feature prevent creating records, making the system unusable?

These are very serious questions.

I also wonder if you can’t standard features such as Dual Write, instead of building your own solution.

thank you for your reply

Your opinion is very good, I did not consider it thoughtfully enough, now I will adopt your suggestion, first import the data, and then synchronize